THE HANDS OF THE AMERICAS
Textiles, jewels, tools and everyday things of five ethnic groups of Central and Southern America.

THE HANDS OF THE AMERICAS

The Kuna are a chibcha-speaking population who lives in the islands of the archipelago of San Blas, by the Atlantic coast of Panama. The Kuna woman always wears the traditional dress, of which the mola is the fundamental part.
It is a hand-sewn cotton panel, made with a technique based on cutting and overlapping pieces of different cloths. The geometric or figurative patterns are of great artistic value.
This kind of adornment originates from the practice of the body paintings which is still in use among a few native American communities.
The molas on show, on 70x100 cm panels, are 36.
The exhibition consists of: a 18' non-stop showing video, Kuna di Panama; a presentation pamphlet "I Kuna di Panama"; 20 colour photos on 120x30 cm panels, daily tools, skein-winder, three man's and woman's traditional costumes.
Indigenous culture of Guatemala, 500 years after America's conquest, is among the liveliest of the continent: presently 21 ethnic-linguistic groups, descendants of the Maya, live in the country. The variety and richness of the traditional regional costumes of the natives reveals the cultural and linguistic pluralism of the country.
The most important piece of woman wear is the huipil, a cotton shirt woven on waist-sash, with particular patterns and colours. The huipiles on show are 20.
The exhibition consists of: a 27' non-stop showing video, Gli eredi dei Maya, proiettato a ciclo continuo; a presentation pamphlet by Linda Asturias on the Maya textile tradition; 30 30x40 cm colour photographs, daily tools, four man's and woman's traditional costumes; 15 litographs by L. Pettersen on traditional costumes.
From the Mapuche, "land people" - as they are called - of Southern Chile, there comes the plateria, t. i. silverware: jewels of solid silver, with numerous and complex ritual patterns, obtained - from the end of 1700 to the beginning of 1900 - from the casting of Spanish and Chilean coins.
Textiles, woven by women, are still used for traditional costumes, whose simbologies and functions can change according to their patterns and colours.
The exhibition consists of: a 20' non-stop showing video, Indios of Amazonia and Gaetano Osculati and mythical Amazonia; Indios of the Southern Cone; a presentation pamphlet "The Mapuche of Chile"; 20 30x40 cm colour photographs, daily tools, two man's and woman's traditional costumes.
Daily and Sunday dresses, hats, jewels, tools, looms. According to tradition, Bolivian weavers draw their inspiration from rainbow's colours.
From their textiles, made of sheep or alpaca wool, there emerge the abstract forms of domestic and fantastic animals.
Jalq'a's textiles, of great formal beauty, have dark and contrastless colours, while Tarabuco's ones are full of bright figures.
The exhibition consists of: two 28' non-stop showing videos, Bolivian Campesinos and Jesusa; a presentation pamphlet "Textiles of Jalq'a and Tarabuco" by V. Cereceda.
Elementi: 25 30x40 cm colour photographs, daily tools, two man's and woman's traditional costumes. The hand-made articles on exhibit are rare pieces, "textile jewels" such as axu (a part of woman dress), ponchos, chuspa (coca's container), chumpi (sash).
The exhibition follows an educational and historical course, from the prints of Giulio Ferrario of the beginning of XIX century to the topical photos of Amazonia.
A refined selection of artistic multicoloured feathers, which are still used today, together with the body paintings, by the ethnic Brazilian groups. An expression of different cultures which preserve and defend their identity.
The exhibition consists of:: two non-stop showing videos, Indios of Amazonia and Gaetano Osculati and mythical Amazonia; 15 old colour prints, representing flora, fauna, natives' daily life, tools and ornaments of the Brazilian Amazonia - from Giulio Ferrario's work Il costume antico e moderno dei popoli del mondo (Ancient and modern customs of world's people), issued in Milano between 1816 and 1820; 25 30x40 cm colour photographs.

Corn, wheat, rice, cassava and potatoes are the primary nourishment of millions of people in the world and women have a central role in food production, processing and trading.

The exhibition consists of:
- 50 colour photographs of women at work shot in Central and South America, Maghreb, sub-Saharan and South Africa, China and India;
- 8 3’ videos filmed in the rural areas of four continents;
- tools for cereals’ and tubers’ harvesting, storage and processing. 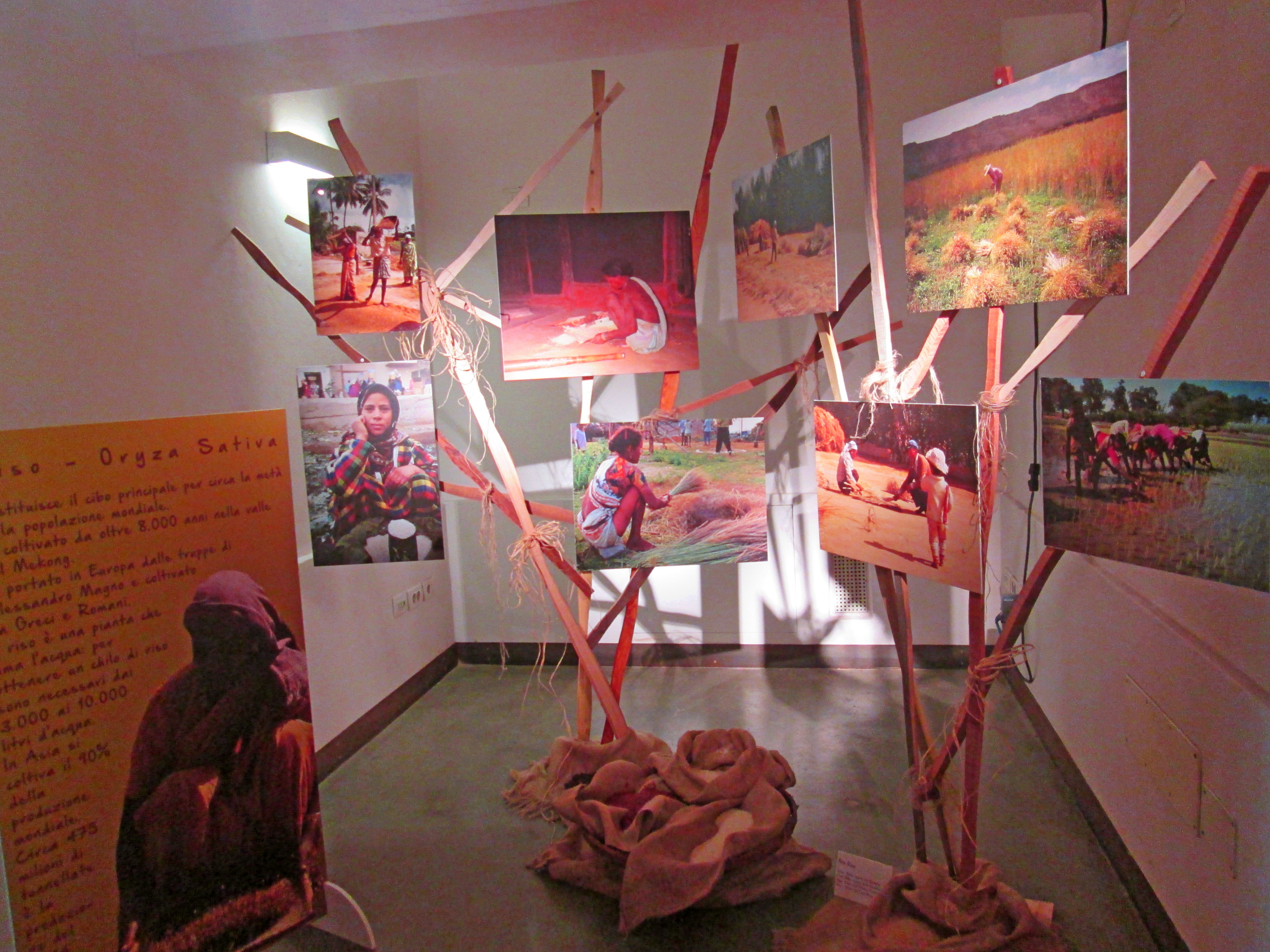 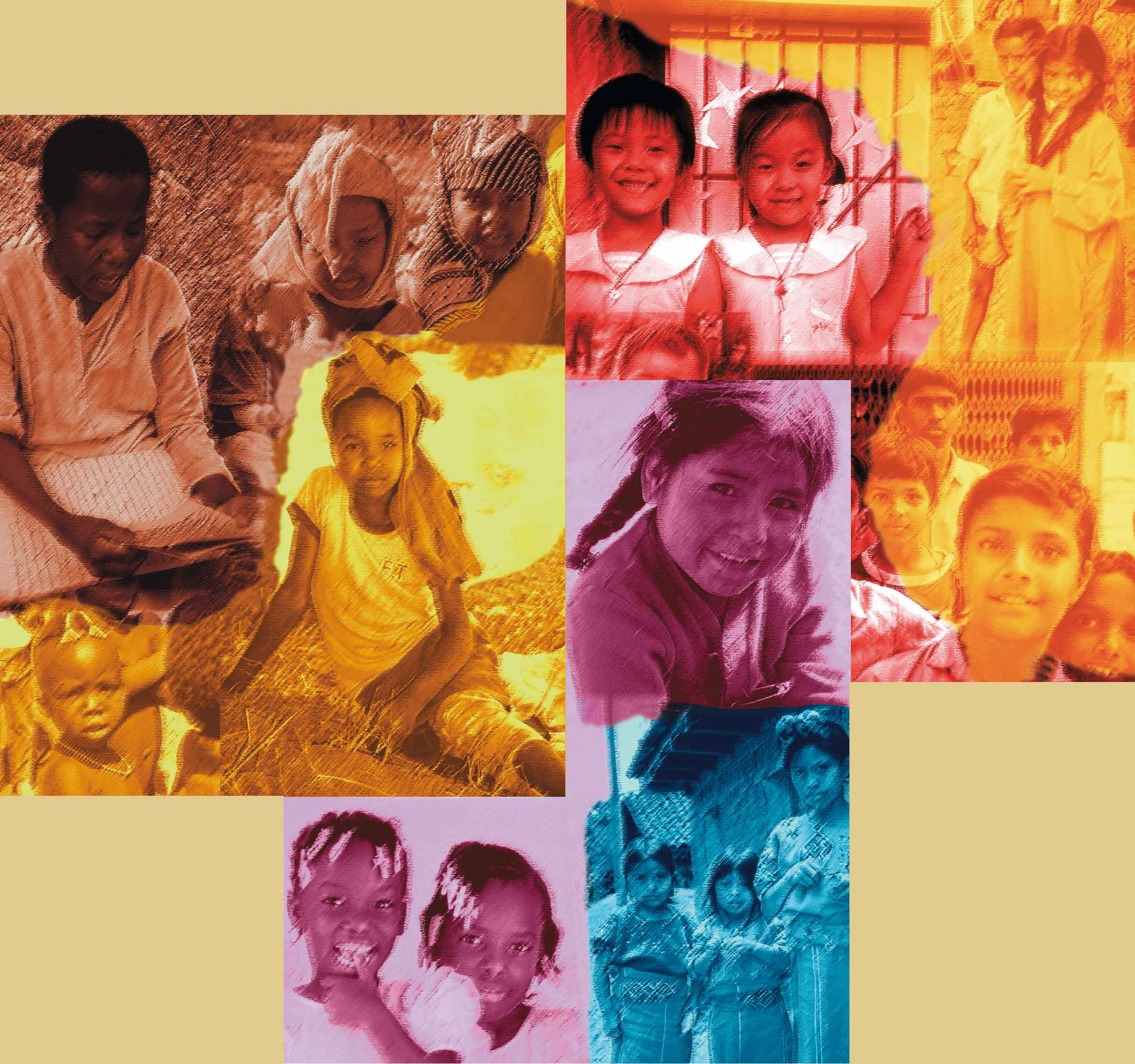 CHILDREN IN THE WORLD

The exhibition is is part of a wide project of education to development realized with the contribution of the European Commission.
The themes analysed are: everyday life, family, home, school, games, work, food, street, violence. We have tried to show the difficult conditions in which most of these children live.

The project is specially meant for the youngsters who live in the North of the world, to stimulate their participation and solidarity.